I grew up in a musical family, learning how to play the guitar at age five and then the piano, bass, drums and other instruments as the years went on. My music is a blend of Americana, Rock, Blues, Folk and Jazz. My professional career started at 15 years old, when I joined the world-beat band, "African Rain." African Rain was led by legendary "Chapman Stick" players, "Bob Culbertson," and "Jim Bruno." Shortly after the band formed, Grandmaster Drummer & Grammy Award Winner, "Babatunde Olatunji," joined our band, and together, we recorded and released our first and only album called, "New World Dance."

I performed with African Rain from the age of 15-21 years old. During that time, we played venues and festivals in California. While performing with "African Rain," I pursued my solo career and formed a band called, "Mr. Herb." In 1995 I recorded and released my first full-length album titled, "You Will Fly." Shortly after my first album was released, I moved to Illinois. There I dug into the blues scene and traveled to New York City to visit Babatunde Olatunji. I was lucky enough to open for him at, "The Sounds of Brazil." In 1997 I moved to Seattle and pursued my music career.  I was involved in many music and recording projects for other artists. The most exciting project was singing on a song called, "I Am an American." The music video for this song/music video was filmed at Seattle's "London Bridge Studios,", and went Nationwide on the Blobkbuster I moved back to my home state of California In 2012, and released my 2nd full- length album, "Miles Around," in 2016.

Currently, I am performing on California's Central Coast as a solo artist and with my duo, "Lewis & Rose." I released my first single, "Wake Up" in January 2022, my second single, "Love & Life," in October 2022.  My duo won an award in the New Times Music Awards in Nov 2022, for our song "Simplify." We won 3rd place in Country/Americana//folk category. I am currently recording songs for my upcoming EP, to be released in later in 2023. You can find my music anywhere you love to listen to your music.

Some venues I have played over the years~

San Francisco's "The Fillmore", "The Palace of the Fine Arts", "The Great American Music Hall", and "Candlestick Park"

locally on the Central Coast of California:

Some of the artists Holly has played with over the years......

Grandmaster Drummer, "Babatunde Olatunji and Drums of Passion" (recorded and performed with)

Bruce Langhorne, (AKA) "The Tambourine Man", (Recorded and performed with)

"Drums of Passion"/"OBA the Band", Gordy Ryan (Recorded and performed with) 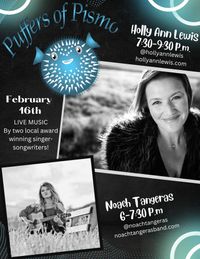 I am super stoked to be playing a solo 2-hour set of my favorite originals and covers at Puffers of Pismo! Opening the show (6:00pm) is the amazing local singer-songwriter, Noach Tangeras! We are hoping to sing a few songs together for ya'll! We hope to see you there for a fun and entertaining night of music at POP!